In the modernised Western world of 2015 Cholera is not a worry to us.  Decades of clean uncontaminated water and proper sanitation has meant that we are totally oblivious to the conditions that millions of peope around Britain had to deal with in the 19th century.  Poverty was rampant and a knowledge of suitable sanitation and public health was non-existent.  Therefore, Cholera in the first half of the 1800s was a genuine fear for the inhabitants of Bilston,but nothing could have prepared them for the horrors that would take place in the summer of 1832.

In March 1832 news trickled it's way into Bilston that Sunderland had been hit by cholera and It was spreading fast. According to Joseph Price, who wrote 'An Historical Account of Bilston' in 1840, a meeting was held to decide whelher Bilston needed to prepare itself. But etther through arrogance. a lack of knowledge or general ignorance, the meeting determined lhat the "general health was never bettor than at that tirme" and ttismissed any necessary precautions. This seems ridiculous in hindsight, but !he main thoughts on the disease were that it travelled in the form of "miasma" (a noxious airborne substance)or even as a punishment from God. 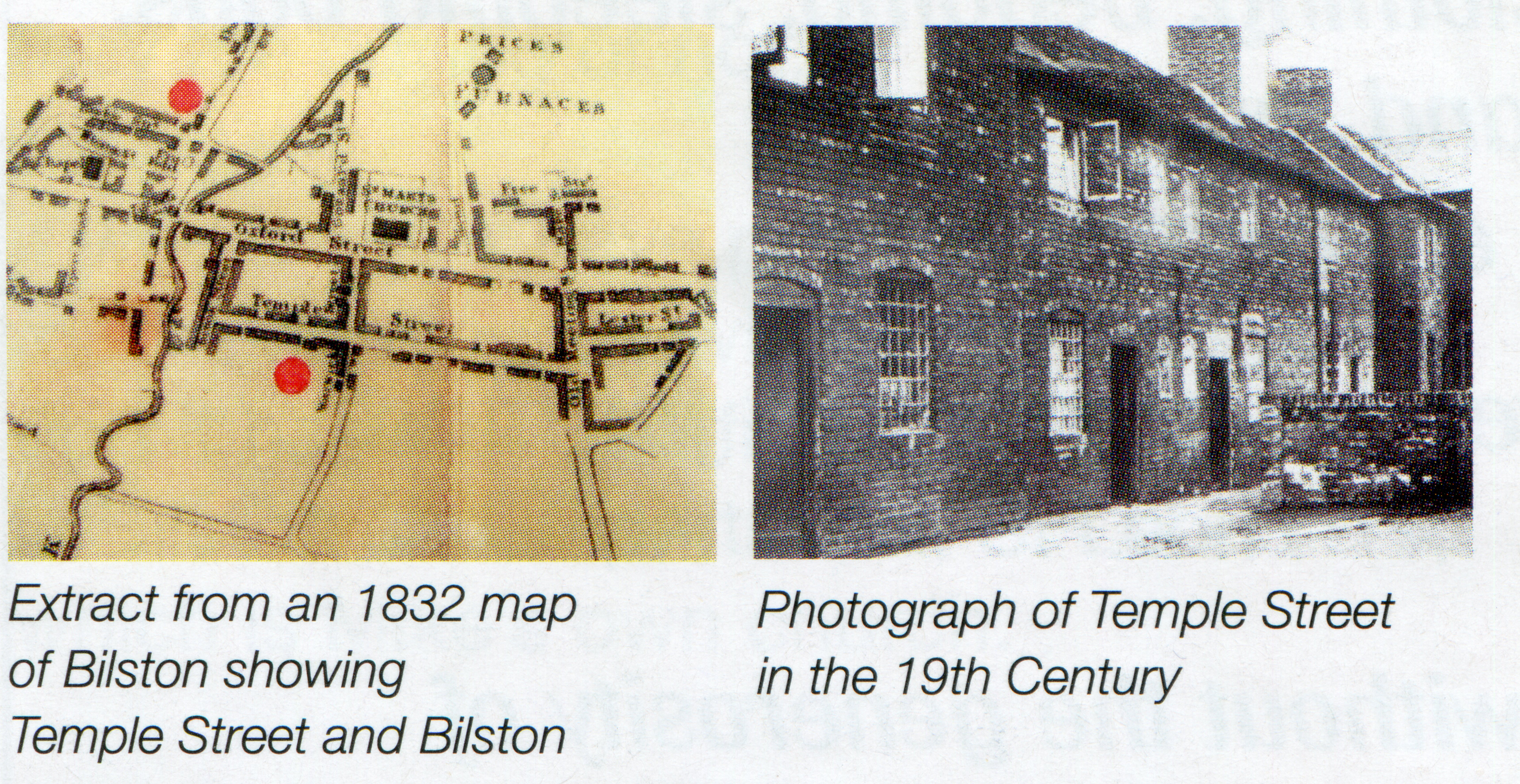 As we know today, cholera is caused by bacteria in contaminated water or food, but nineteenth century Britain were unaware of this and were not aware of the damage cramped living conditions and inadequate sanitation could cause. As we still see in less developed countries. local drinking water can be easily contaminated by human waste. With Bilston’s population exceeding the space available, the working class would have been living in overcrowded streets using water that was infected by faecal waste for drinking, cleaning and cooking. With such communities springing up all over the country in the first half of the nineteenth century it was unsurprising that cholera would hit. By July 1832, Tipton was hit by the illness.

As Joseph Price writes, cholera made its appearance "as a thief in the night'' on Friday August 3rd and hit three people "In the most densely populated part of the town". This part of the town laid either side of Bilston Brook and was on low ground.

Bilston Brook Is no longer in existence, but it trawled through the heart of this area coming from the Walsall Canal, and in modern day terms, running past The Black Country Route, through Oxford Street Island and parallel to Brook Street, which adjoins Temple Street. It then carried on into the direction of Dudley Street. The first three people affected were; t 6 year-old Richard Dyke who lived in Old Street, 35 year-old Elizabeth Dawson from Temple Street and two year-old Mary Cleaton from Hall Street.

It soon spread and from the 3rd August to the 18th September whole families were wiped out by the disease. The community of Bilston was shook and it was not just consigned to the lower classes.. Price writes about how the upper classes aimed 10 leave Bilston to escape, but even some of their number was affected before they had the chance to.

Extraordinary stories of the deceased and the community of Bilston are throughout Price's account, and it is quite harrowing to read that the dead were piling up so quickly that coffins had to be brought in from Birmingham. Someone didn't have the common sense lo cover them up when they arrived and they littered the outside of the undertakers, which must have given the people a sense of dread. By mid-September one in twenty people of Bilston's population had died. Rev. W. Leigh, Vicar of Bilston, wrote in his 'History of the Cholera': 'Manufactories are closed, and business completely at a standstill…the hearse carrying the dead to the grave Without intermission.'

Overall, 742 people died in Bilston. with a total of 3,568 cases experiencing illness, but the town would strive on. Four hundred and fifty children, under the age of twelve, were made orphans and many residents who survived cared for the for many years to come. On the one year anniversary of the epidemic, the Cholera Orphan School was opened. This honoured those orphans who had survived. For many years after people still did not under• stand the disease and Joseph Price himself celebrates that after the epidemic, the townspeople turned away from bull-baiting and that the Sabbath was in good attendance. For him the town had been taught a lesson by God, but it was tho ignorance about public heath that truly brought Cholera to Bilston and the problem would not be remedied for many years to come.